The Sachsenhausen Concentration Camp, located 35km north of Berlin, was the first camp built on the orders of the Nazis regime in 1936, and served as a model for all the other camps.

The tour includes the entire camp, and is not intended as a casual walk, but a visit to inform visitors and encourage reflection and understanding of what modern man is capable: that hatred of and malevolence towards one’s fellow man has no limits. 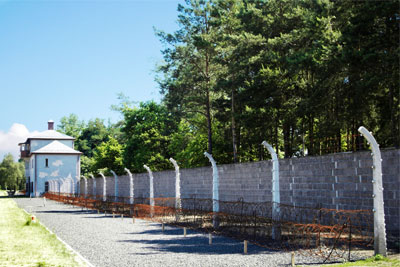 Among many other sites, you will visit:

The jewish compounds, the original compounds where Jews were crammed into until 1942, when they were sent to Auschwitz to be exterminated.

Station ‘Z’; gas chambers and crematorium, chilling place, silent witness to the crimes which were committed under the Nazi terror, hitherto unknown to humanity.

Sanitorium, place where sadistic medical experiments were carried out with hundreds of people, many of whom were young children…and many more places too numerous to name.

We will also visit: